Goya and the Maja – A new flamenco ballet (on-line performance)

Goya and the Maja is the 25th anniversary production of Bolero Dance Theatre.

This Spanish dance production highlights recurrent themes and characters in the work of Spanish artist Francisco de Goya. His art depicted at first pastoral vignettes during outdoor festivals, the royal life at court, and then a world in turmoil due to war and changes in society. The latter depicted in his “Caprichos” and “Black Paintings”.

“Francisco de Goya is considered the most important Spanish artist of the late 18th and early 19th centuries. His paintings, drawings, and engravings reflected contemporary historical upheavals and influenced important 19th- and 20th-century painters. Goya is often referred to as the last of the Old Masters and the first of the moderns.” -Wikipedia

Just like in the times of Goya, we have also endured many changes in our world. In our case as a result of COVID-19. Work for this production started just before the pandemic started. We were able to face the difficult times by channeling our frustrations, fears, and hope through our dancing. 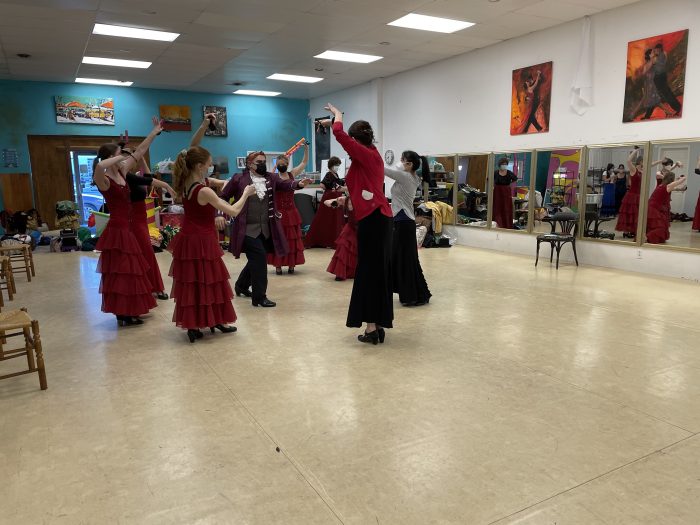 PEDRO AURELIO is the founder and Artistic Director of Bolero Dance Theatre. He started his ballet and Spanish dance training in Puerto Rico with Gilda Navarra, continuing in St. Petersburg, Russia and Washington, D.C. He performed with the Spanish Dance Society in such venues as the Kennedy Center and the Museum of Natural History in New York. He trained in the Royal Winnipeg Ballet’s Professional Division and graduated with distinction from their Teachers Course.

Pedro Aurelio continued his Spanish dance training through several trips to Spain where he studied escuela bolera, classical Spanish, and flamenco with Beatriz Barcelo, Pilar Azorin, Carlos Vilan, Pepa Molina, Mamen Tejedor, Javier Palacios, and David Sanchez. Over the years, and thanks in part to grants from the Manitoba Arts Council and Winnipeg Arts Council, he worked closely with master teacher Eloy Pericet in Spain learning the full repertoire of historical bolero dances.

As Artistic Director of BDT, Pedro Aurelio choreographs most works for the company and designs both costumes and sets. Some of his productions for the ensemble include House of Bernarda Alba, Carmen, Amor Brujo, Picasso, Matador, Cleopatra, and Lorca.

GENEVIÈVE LATOUCHE is the Assistant Artistic Director for Bolero Dance Theatre. She began studying Spanish regional dance as a child with Sol de España, under the direction of Carmen Cano de Infante. She has performed with them at events around Manitoba, as well as on two occasions at the World Folkdance Festival in Palma de Mallorca, Spain.

Geneviève began flamenco lessons with Claire Marchand as a young child, and as a teenager became a soloist for Bolero Dance Theatre, under the direction of Pedro Aurelio Colón. She has been featured in many of the company’s productions, including playing the lead in their first production of Cinderella. She has also travelled with the group to Madrid, Spain to study at the former Marta de la Vega school.

Geneviève has also studied danza estilizada and flamenco with Maritel Centurion. She later spent two years in Madrid, where she studied danza española at Centro de Danza María Rosa and two years in London, where she studied at La Escuela de Baile. Upon returning to Winnipeg, she began teaching at Institute of Dance of Manitoba and choreographing for Bolero Dance Theatre’s productions. She is currently completing her Spanish Dance Society teaching certification.

GLORIA CHEN Born in Taipei, Taiwan, Gloria Chen trained in Classical Ballet and other forms of dance. She is an original member of Bolero Dance Theatre since the company’s beginnings, dancing in lead roles including Cinderella, Scheherazade, Matador and Blood Wedding. Additionally, Gloria has taken numerous workshops in many forms of Spanish dance with Claudia Carolina, Maritel Centurion, Mamen Tejedor, Katerina La Greca, Eloy Pericet, Paloma Gomez and Beatriz Barcelo. Gloria furthered her Spanish dance training by going to Madrid, Spain in 2003 and 2008 to study at Escuela de Marta de la Vega. She has performed with the Winnipeg Symphony Orchestra, Winnipeg’s Contemporary Dancers and the Winnipeg Fringe Festival.

MONIQUE RIVERA has has been studying Spanish dance since 2003, when she joined the Sol de España Spanish folk dance group through the Spanish Club of Winnipeg, under the direction of Carmen Cano de Infante. She began flamenco lessons with Claire Marchand the following year. With Sol de España, Monique has performed yearly at multiple events around Manitoba through Folklorama, as well as the annual Folklorama festival. She has travelled with the group to Palma de Mallorca, Spain twice for the World Folkdance Festival.

At the age of 18, Monique was featured as a soloist for the first time in a production through Bolero Dance Theatre, under the direction of Pedro Aurelio Colón. She has since been featured in lead roles in multiple company productions, such as Matador, Cleopatra and two separate productions of Carmen. She has also travelled with Bolero Dance Theatre to Madrid, Spain for a summer intensive course at the former Marta de la Vega school, where she studied flamenco and danza estilizada with Beatriz Barceló, La Popi and David Sánchez. Monique currently teaches flamenco at Institute of Dance of Manitoba.

HOWARD CHAN is the Musical Director for Bolero Dance Theatre. He began his Spanish dance training with Bolero Dance Theatre in 1998. He went on to take workshops and classes in Flamenco, Classical Spanish and Bolero with Mamen Tejedor, Pilar Azorin, Eloy Pericet, Paloma Gomez and Beatriz Barcelo. Howard furthered his studies in dance by going to Madrid, Spain to study at Escuela de Marta de la Vega in 2003 and 2008. With a degree in music from the University of Manitoba, Howard has been Music Director for Bolero Dance Theatre since 2013. Howard’s repertoire with BDT includes Salvador Dali in Lorca, the Matador in Carmen and Marc Antony in Cleopatra.

MEGAN LATOUCHE is a modern dancer who has studied Spanish folk dance with Carmen Cano de Infante for over 20 years. She began dancing with Bolero Dance Theatre 17 years ago, under the direction of Pedro Aurelio Colón, and has performed in the company’s annual productions since then. Megan has been featured as a soloist in various productions, including as an ugly stepsister in Cinderella and Martirio in The House of Bernarda Alba, as well as performing self-choreographed contemporary pieces as Death in Blood Wedding. She has travelled to Madrid with the company to study at the former Marta de la Vega school. She has also studied flamenco with Claire Marchand and danza española with Maritel Centurion. Megan has performed under the direction of Maritel Centurion at events around Winnipeg. Megan is currently studying Spanish folk dance with Erica Infante Yaeger in addition to her continued involvement with Bolero Dance Theatre. In summer of 2020, she performed with BDT in a virtual recital for Expresarte in Madrid.

BRENDA GIESBRECHT is a founding member of Bolero Dance Theatre. She has studied flamenco and classical Spanish dance in Winnipeg with both local and guest teachers from across Canada and Spain. She has also travelled to Spain to study with La Cintia, Beatriz Barceló, and Mamen Tejedor. Brenda has trained in ballet for many years, and has had the opportunity to learn and perform Mexican folk dances, tango and salsa for various productions with Bolero Dance Theatre. Brenda has performed extensively with the company at venues and events in Manitoba, Ontario, and North Dakota. Throughout her years with Bolero Dance Theatre, she has danced as a soloist in many productions, such as The House of Bernarda Alba and Picasso.

CHARLENE SMELSKY has been a member of Bolero Dance Theatre since 2010, performing as a soloist in various annual productions. She began her Spanish dance career in 2008, studying danza estilizada and flamenco with Maritel Centurion, performing at various events around Winnipeg. Since joining Bolero Dance Theatre, Charlene has travelled to Spain, where she studied at the Escuela de danza y música Marta de la Vega summer intensive and learned traditional Escuela Bolera choreography from Eloy Pericet. In Winnipeg, Charlene has studied with guest teachers such as Concha Jareño, Carmen de Torres, Carmen Romero, Deborah Ibach and Paloma Gómez. She also studies ballet, jazz, tap, lyrical and modern at the Royal Winnipeg Ballet school.

KIERAN LLOYD has been a member of Bolero Dance Theatre, under the direction of Pedro Aurelio Colón, for seven years. She has performed in annual productions with the company, including Carmen, Scheherazade and Lorca. Kieran has been studying danza española with Geneviève LaTouche for three years, where she has been working towards completing her graded Spanish Dance Society exams. Kieran also studies ballet regularly at the Institute of Dance of Manitoba. In summer of 2020, she studied a distance intensive course through Expresarte in Madrid, where she participated in a virtual recital with fellow Bolero Dance Theatre members.

SOPHIE KOLISNYK-TOD began studying flamenco, Escuela Bolera and danza estilizada in 2016 at Institute of Dance of Manitoba with Geneviève LaTouche. She has performed choreographies in the Dance Manitoba Provincial Festival and in 5, 6, 7, 8 Showtime, where she has been invited to perform flamenco pieces in the Dance World Cup. In 2018, she began studying folk dance and flamenco with Erica Infante Yaeger and Escuela Bolera with Perdo Aurelio Colón. Since 2016, she has performed in Winnipeg’s Folklorama festival. Goya and the Maja will be Sophie’s second production with Bolero Dance Theatre.

WEI-AN LAU began studying flamenco with Maritel Centurion as a young child. During that time, she completed exams in the Spanish Dance Society graded syllabus. In 2016, she began studying flamenco, danza estilizada and Escuela Bolera with Geneviève LaTouche. She has performed in the Dance Manitoba Provincial Festival, where she has won scholarships for her work in Spanish dance under the direction of Maritel Centurion and Geneviève LaTouche. She has also been invited to perform Spanish dance pieces in Dance World Cup through 5, 6, 7, 8 Showtime. In 2018, Wei An began to study Spanish folk dance and flamenco with Erica Infante Yaeger and Escuela Bolera with Pedro Aurelio Colón. Goya and the Maja will be Wei-An’s second production with Bolero Dance Theatre.

CARMEN MACHNICKI has been studying danza española at the Institute of Dance of Manitoba since 2016. She began flamenco and classical lessons under the direction of Geneviève LaTouche and has studied Spanish folk dance and flamenco with Erica Infante Yaeger since 2018. Carmen has performed in Canadian dance competitions, including the Dance Manitoba Provincial Festival and 5, 6, 7, 8 Showtime. She has also performed in Winnipeg’s Folklorama festival for two years. This is Carmen’s first year performing as an apprentice with Bolero Dance Theatre.

JAZMINE MCNARLAND began studying Spanish folk dance with Carmen Cano de Infante at the age of 5, when she began performing in Winnipeg’s Folklorama festival with the Sol de España Spanish Folk Dancers. Since her debut with the group, she has performed in various events around Manitoba. Jazmine began dancing with Maritel Centurion at the age of 9, learning the Spanish Dance Society syllabus. She later began studying flamenco, danza estilizada and Escuela Bolera with Geneviève LaTouche. She has also studied Spanish folk dance and flamenco with Erica Infante Yaeger and Escuela Bolera with Pedro Aurelio Colón. Jazmine first performed at the Victoria Flamenco Festival at the age of 11, where she shared the stage with Winnipeg professionals and Sara García of Madrid, Spain.

YANNICK LEGRAND has always movement in her soul.  As a child, she was always interested in acrobatics and dance.  She started ballet in her elementary school gym and went on to the École Supérieure de Danse at the Grands Ballets Canadiens in Montréal. A major accident halted things for her, but she went on to dance for a few years with Dance One Sixty, with Joost Pelt and Marilyn Lewis-Pelt, before becoming a registered massage therapist. Pedro Aurelio Colon later invited her to come back to dance and join Bolero Dance Theatre. She has had many pleasurable years of performing with this troupe, portraying a variety of different characters.