Cities of Sand is an exploration and reflection on how sand permeates everyday human existence, from the movement of sand as a measure of the passing of time, to the sand’s entrapment into the building blocks that have shaped our urban lifestyle. In fact, sand is around us everywhere, from the ground we step on and drive upon, to the concrete and glass of the buildings. Despite our modern lifestyle being build upon usage of this vital natural resource, we barely notice its presence in our lives. Yet, our world is rapidly running out of it, and there is an ever-increasing need for awareness. Cities of Sand aims to bring this reflection to both, individuals and society, in a moment of our history in which we are collectively facing the dark night of the soul represented by the COVID-19 global pandemic.

We would like to give special thanks to Olmo Mariano Ayala y Ricardo Fuentes Luna for their incredible work during the creation of this project and all the inspiration they have provided. Anastassiia also would like to thank Alberta Foundation for the Arts for the support in the research and development of this piece. 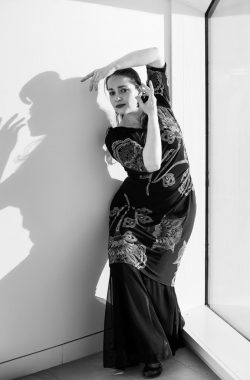 Anastassiia Alexander is a Russian-born, Mexican flamenco dancer residing in Calgary, Canada. Trained in Madrid,Spain, her artistic practice is deeply rooted in tradition, yet explores the boundaries and the intersection of flamencowith contemporary dance forms. Anastassiia’s creative process is based on free and structured improvisations, whilebuilding spatial and rhythmic patterns in response to the music or other visual or audio inputs. Her flamenco training includes four intensive sessions at the famous Amor de Dios Centro Flamenco y Danza Española in Madrid over a

In 2016, Anastassiia Alexander and violinist Jonathan Lewis formed a contemporary flamenco ensemble, 12 Musas tostrengthen the connection between music and dance. A versatile dancer, she has performed in productions varyingfrom opera to traditional flamenco tablaos in Calgary, including performances in Mexico City at Flamenco Tablao withthe contemporary flamenco company INTERflamenca under the direction of Ricardo Rubio. Anastassiia was also aguest dancer for the production of La Traviata by Calgary Concert Opera, as well as a lead dancer and choreographerfor the production Carmen at the Badlands by Mercury Opera (Edmonton). Other highlights include performances withthe Calgary International Flamenco Festival, Flamenco Nights with Salero Calo, guest artist with Notas de 4 and FionaMalena Flamenco Ensemble. In 2015, Anastassiia was a featured artist in a video by world musician Jeff Kavanda forhis single Bossa Kava. Since then, she has also collaborated with Syrian-born singer-songwriter and our player AyaMhana on a video for her song Love Still Means the Same (2020), and with jazz singer Tina Hartt for her single Kiss ofFire (to be released in 2021).

More recently, Anastasia has progressed to creating or co-creating productions, including collaborating with sopranoLinda Faye Miller for Tierra de Luz, a concert combining classical Spanish music fused with flamenco music and dance. She also participated in a spoken word concert Words that move me, where dancers interpreted poetry. Her recent co-production with dancer Fiona Malena, Tarantella, was presented first in Calgary and then at the Victoria Flamenco Festival in July 2019. Anastasia’s newest creation De(Re)-construct: Dance (Re)-Born was presented at the Fluid Fest in October 2019 in Calgary. Anastasia is also the winner of Flamenco Rosario’s 2019 Creative Residency, which led to the 2020 interdisciplinary film Interoception. Currently, Anastasia is developing her latest artistic film Cities of Sand, which has been supported by the Alberta Foundation for the Arts Individual Dance Grant.

Anastasia is recognized as a passionate teacher, cultivating appreciation for the flamenco art form in her students. She started teaching in 2011 and frequently teaches as an instructor in Calgary. In July 2018, Anastasia was also invited to teach as a guest instructor for the School of Alberta Ballet. Anastasia continues opening up new directions for flamenco in Calgary and contributes to building a strong local community of flamenco aficionados. www.lamusaflamenco.com 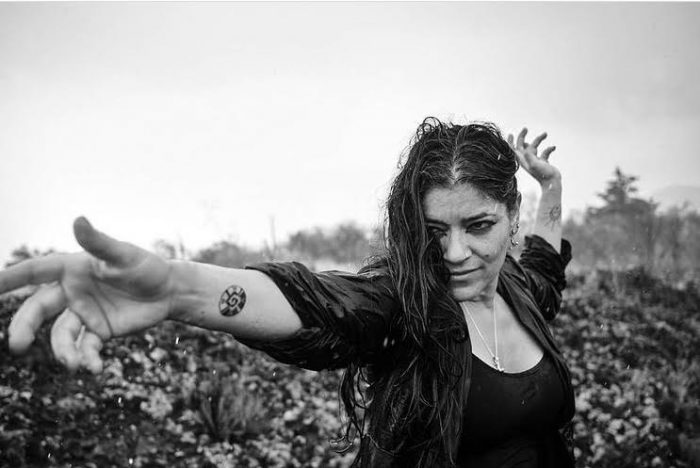 Flamenco dancer and choreographer born in Torreón, Coahuila, México. She began her dance studies in Mexico in 1996 with María Díaz, Mercedes Amaya and Joaquin Fajardo. She continued her studies in Spain with traditional dancers and choreographers such as Carmen Ledesma, Angelita Gómez and Milagros Menjibar, as well as with the new talent from the Flamenco world, including Rafael Campallo and the Farrucos, as well as a great number of actualization courses that bring the unique quality to her dance.

In Mexico, she has been part of several companies of Mercedes and Karime Amaya, Joaquín Fajardo, María Antonia La Morris and has been part of innumerable choreographic projects like Interflamenca and Ensemble Egiptanos of Music Migrant of Mexico and in Canada has collaborated with companies like Rosario Ancer and “La okra gorilla” as soloist and guest artist. In Mexico, se has danced in tablaos as Mesón Triana, Olé Sevilla and Gitanerías. In Spain she has worked in Jerez de la Frontera in flamenco clubs as the Zúa organized by Angelita Gómez, and in Seville in the Carbonería, La Casa de la Memoria, Peña Pies de Plomo y El Cortijo. She has performed in all the flamenco cycles of Mexico City such as Teatro de la Danza, the National Centre of the Arts, Sala Miguel Covarrubias, Teatro de la Ciudad, Palacio de las Bellas Artes and several in the Festivals of flamenco. She has given many national and international seminars in Mexico, Japan, Taiwan, Canada, Germany and Belgium.

She is co-founder of Hojas de Te: a Flamenco cultural centre and forum where she teaches regular classes, generates her own projects, and spreads flamenco roots through courses and seminars as well as co-productions of her own company. www.marienluevano.com.mx 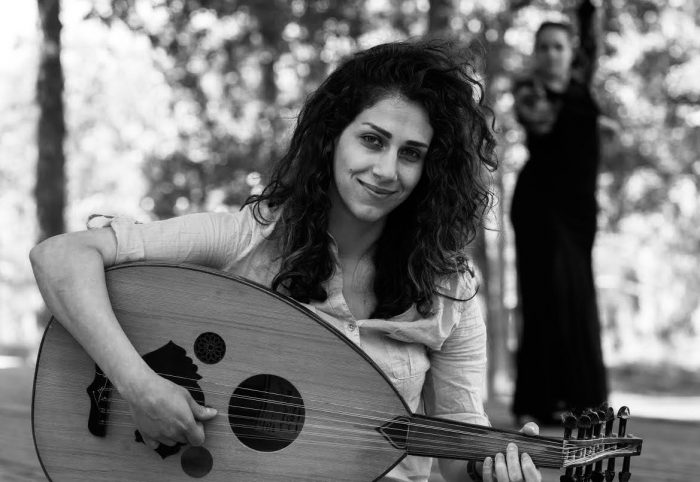 Aya Mhana is a Syrian-born singer, songwriter and oud player. Now a proud Canadian citizen, Aya moves easily between English and Arabic, writing lyrics with a poet’s sensibilities.
Since emigrating to Calgary, Canada, in 2016 , Aya has performed at the Calgary Stampede and Globalfest, and with the Kensington Sinfonia. Also, got invited to Folkfest.

In 2020, for her outstanding commitment to the community and art she received the Calgary Catholic Immigration Society New Canadian Artist Award and the Portal De L, immigrant Association (PIA) award. She formed a band called HYMM, a seven-piece ensemble that often graces Calgary coffee houses with its Middle Eastern fusion repertoire.

Aya’s musical journey is deeply influenced by her Syrian roots. Which was obvious in her album(Homeland) the combination of two homelands that she has Canada and Syria, Hailing from Sweida, she taught herself to play the oud (a string instrument similar to the lute) during high school, and graduated from the University of Damascus with a degree in education. She volunteered with the Syrian Arab Red Crescent, working with families displaced during the Syrian war.

Inspired by her volunteer work, Aya used her music to explore the human capacity for hope during wartime, and performed her compositions in her home city. In Canada, she translates the rich culture of her homeland for audiences who often know little of Syria, but are eager to embrace her soulful melodies.

As an artist who inhabits the crossroad between nations, Aya is committed to speaking out about issues on exile and diaspora, and to celebrating the importance of home. She hopes that her music helps shape Canada’s vision for a peaceful and vibrant cultural mosaic. https://www.youtube.com/channel/UCe8UlOO6oPTbYxvdc73m3Fg 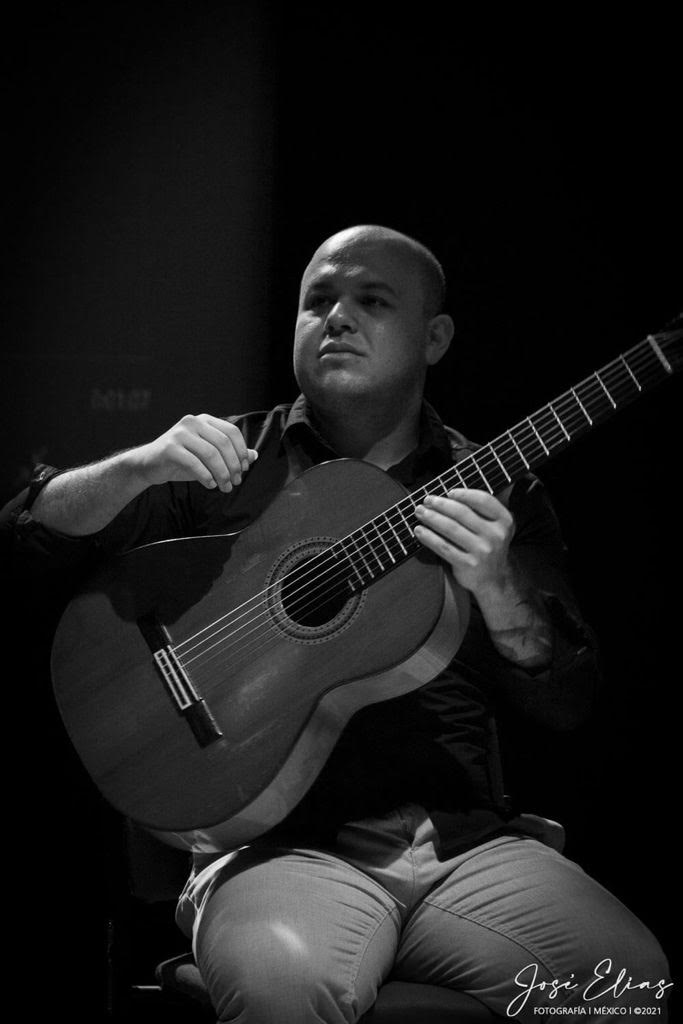 Ricardo Sánchez is a Mexican flamenco guitarist and singer and a current member of INTERflamenca, contemporary flamenco company directed by Ricardo Rubio in Mexico city. The company creates variety of performances with the focus on contemporary and interdisciplinary scenic techniques. Ricardo is a sought out performer who plays in tablaos across Mexico and accompanies both with his guitar and singing. As such, he has performed with the most representative flamenco dancers in Mexico, Ricardo Osorio “El Niño”, Marién Luévano, Ana Pruned y Ricardo Rubio,and was also part of a flamenco fusion project “Egiptanos X”. He frequently performs at different festivals across the country and internationally. Some of the highlights include International Flamenco Festival in Vancouver (Canada), Cultural Festival of Zacatecas (Mexico), International Festival of Chihuahua (Mexico), Rosario Castellans Festival in Comitán Chiapas (Mexico), and International Festival “Chimera” in Metepec (Mexico). Ricardo has also participated in various recordings, among them is the recording “Misters Gozosos” by Mexican singer Susana Harp. https://www.guitarraflamenca.com.mx/